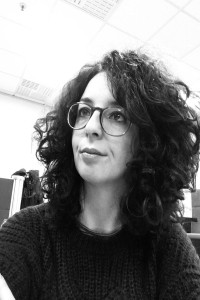 BIOGRAPHYElena Ferraro obtainedher PhD in PhysicsfromUniversity of Palermo (Italy) in 2010. Shespentsseveralmonths at the University “Albert Ludwigs” of Freiburg (Germany) working on a researchactivity about Markovian and non-Markovian open quantum system. Shejoined CNR-IMM in 2012 as a theoreticalresearchscientist in the field of quantum computation withsilicondevices. Her main interests deal with: modelization and analysis of qubit architectures with CMOS technology; nanostructures based on quantum dots and donors; analysis of the sources of disturbance and noise on thatsystems and implementations of quantum logicalgates. Elena Ferraro published over 30 journal articles and just as manytalks at international conferences and universities.

In the framework of solid state physics a rich exploitable platform for universal quantum computation, as witnessed by several experimental and theoretical proposals, is represented by the confinement of electron spins in host semiconducting materials. The confinement is achievable following different routes, from electrostatically or self-assembled quantum dots (QDs) [1] to donor spins in solid matrices [2] or a combination of them. Semiconductor nanostructure-based qubits are an attractive scenario for technological applications due to their relatively long coherence times, the easy manipulation, fast gate operations and potential for scaling. In addition the interest towards silicon qubits is immediately linked to the integrability with the already existing CMOS (complementary metal oxide semiconductor) infrastructure of the microelectronics industry. Several proposal are presented in the literature based on single electron spin qubits [3], singlet-triplet spin qubits [4], or a three electrons architecture called hybrid qubits [5-8]. We study five qubit types, namely the quantum dot spin qubit, the double quantum dot singlet-triplet qubit, the double quantum dot hybrid qubit, the donor qubit and the quantum dot spin-donor qubit. For each one, we present the effective Hamiltonian model and we derive analytical time sequences that realize single qubit rotations along the principal axis of Bloch sphere. Then we study the entanglement fidelity when errors disturbing the control parameters are taken into account by using a Gaussian noise model [9, 10]. In order to have an homogeneous analysis for all the five qubit architectures, we consider two different sources of noise linked to the z and x contribution appearing in the effective Hamiltonian models. Every time that the architecture is specified such abstract controls become physical entities giving a real mean to the type of disturbance (e.g. hyperfine interactions, charge noise, ...) and a measure of it. Then gate infidelities of all the qubit types due to the time interval error are compared by using a realistic set of values for the error parameters of amplitude controls. This study provides a ranking of the gate fidelities for the different qubit architectures highlighting which one is the most robust with respect to the considered control noises. Moreover it offers a general platform giving an important instrument for future works together with the development of experimental realizations.

Acknowledgements: This research was funded by the European Union’s Horizon 2020 research and innovation program under grant agreement No. 688539 MOSQUITO.